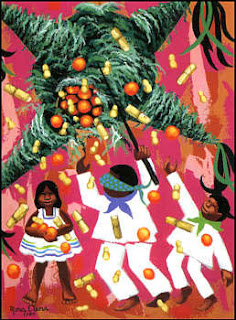 Traditionally, Mexican posadas are religious celebrations that begin on the 16th of December and ends on Christmas Eve.  These festivities symbolizes the pilgrimage that Mary and Joseph made as they were looking for lodging and awaiting the birth of Jesus in Bethlehem.  Record of the first posada goes back to the 16th century!

Neighbors commemorate together by strolling the streets of their neighborhood.   They carol, pray and knock on doors asking for a room.  An important tradition is the smashing of the Piñata, which represents the destruction of evil; the seven points of the Piñata represent capital sins. The nine days of festivities stand for for the nine months of Mary’s
pregnancy.
http://www.buceriasrealestatesite.com/
#posadasbucerias
#mexico
authored by Guylaine Gignac
Posted by Unknown at 1:53 PM No comments: